the hidden cost of constantly overdelivering 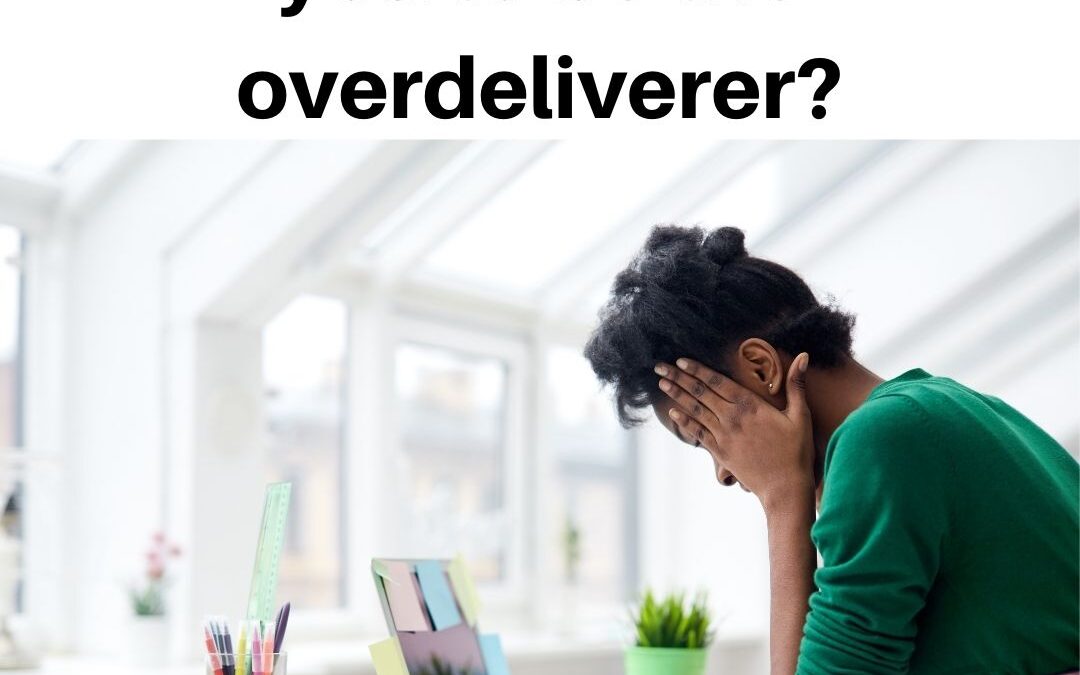 Do you pride yourself on being an over deliver? Or perhaps you’re living on adrenaline. If you’ve been living on adrenaline for a long time, you won’t even recognise that you’re burning through this essential hormone. You see, there was a time in my life where I worked as a project manager. My project was based in the UK in the US and I’d been brought in to fix what two previous project managers hadn’t. So there was a bit going on.

This project was a tech project. And it was 1999, the time of the dot.com bubble. And it burst. So fast track six months. The prototype’s delivered. We had demo’ed it at CeBIT, which was the tech fair of its time. But the economics of the dot.com bust had landed. And rather than going into delivery, I was making my team redundant, knowing that I’d be the last person to turn out the lights.

What I learned from my recovery

So three months after closing everything down, I was on gardening leave prior to my imminent departure. And I’d used this time to restore and recover.

I was walking down the road one day to the gym, my water bottle fell out of my backpack, and it tapped me on the back of my ankle. I felt this surge of energy through my body as adrenaline primed me to fight or flee. It’s a physiological response, right?

But here’s the thing. I hadn’t felt that in the entire year I was working that project. Do you know why? I had become so habituated to living on adrenaline, I didn’t even know I was doing it.

Now, I used to pride myself on being the multitasking queen. And that was one of my superpowers that I bought my project roles. The appearance of effortlessly juggling and delivering time after time, like that Swan gliding across the water.

Except that neuroscience has shown we don’t multitask.

We flip from one small task to another so quickly, it seems we’re doing them at the same time. But, it takes more energy to do this and you lose deep thinking processing while you’re doing it.

So let me ask you a question. What do you personally get by over delivering? You see, in everything we do, there’s always a hidden benefit. It’s what neuroscientists call a secondary gain. So what’s yours?

What do you get from being an overdeliverer?

Over delivering can show up in many ways. For example, you may never get to go out on a limb for that thing that matters because you’re too busy doing the other safer stuff. You don’t risk embarrassment at something that’s not working or feel vulnerable in sharing that new idea. Maybe your overdelivering means it has got to be perfect. So perfect, that in fact, it never gets done.

Do you get to make you right and somebody else wrong? Do you get validation by being so busy, invested in the appearance of having everything under control? But you’re ignoring the fact that you’re tired. You’re anxious that your humanity might get found out. Neglecting your self care because you’re busy taking care of everybody and everything else, but you.

How to overcome the overdelivering

What would it be like if you took one day out of your week, and you dedicated it to you?

Being and doing what makes you happy. Quality time with loved ones with the work phone off. Reading a book just for fun.

When was the last time you sat in silence, alone with your thoughts? And you felt good about it?

You’ll be amazed at how much more energy you have through the rest of the week because you gave your body the space to do what it’s really good at. And that’s taking care of and loving you.

Relaxing and recentering is the work. Not being busy is the hardest part of that work.