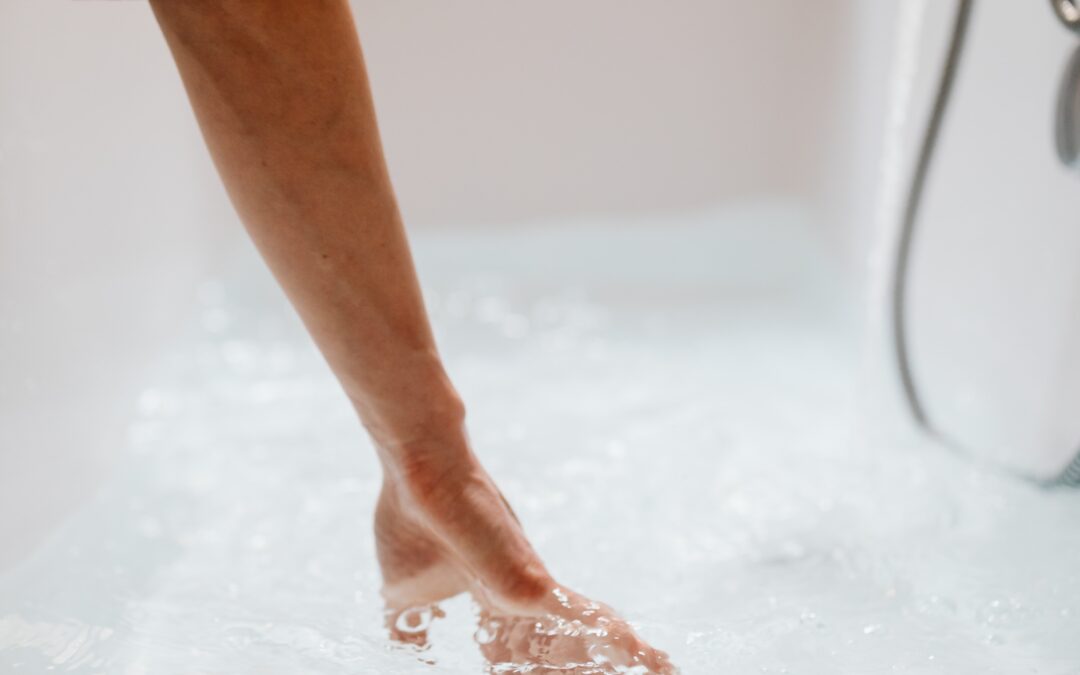 When I injured my knee one day before a hike, I was reminded of the effectiveness of contrast therapy.

The knee showed all the signs of acute inflammation. A red skin that was hot to the touch and swollen. I was struggling to walk with it. Rather than reaching for the Nurofen, I decided to use contrast therapy.

what is contrast therapy?

Contrast Therapy is the application of hot and cold water to an affected area, and the contrast is in the change in temperature.

Contrast Therapy can be done several times a day, and at a ratio of three to one. One and a half minutes in water as hot as you can handle and then thirty seconds in water as cold as you can tolerate.

Do this by alternating the sauna with the ice bath if you’re at a spa, or have one at home. But personally, I use the handheld attachment in my shower.

You can use the faucet to alternate from hot to cold by turning the dial. For the knee, it’s extremely easy. Stand in the shower with your leg exposed, and use the shower head to get the hot water over the affected area and breathe. Then next comes the test of will as you turn the dial back to cold. Remember to breathe, although usually there’s a sharp intake of breath when the cold water first hits your limb.

If you don’t have a flexible showerhead, you can fill two buckets of water. One with water as hot as you can tolerate and one with cold water, and then add some ice to the cold water to keep it chilled. Grab a mug out of the cupboard, and sit in the bath, or the shower, and use the mug to pour hot water on the affected area for one and a half minutes, and then thirty seconds of cold water is poured over it with the cup. Keep repeating this for seven times.

Always start with the hot and finish with the cold, and it doesn’t really matter how many times you do it if you’re finishing with the cold. You’ll notice a reduction in the swelling quickly over three days.

how does contrast therapy work?

The hot and cold water cause the affected area to vasodilate and then vasoconstrict, and this encourages oxygenated blood into the area during the vasodilation. The fluid carrying the tissue waste is removed from the area during the vasoconstriction, and the combination of pumping fluid through the area improves healing and improves repair. It also improves the limbs’ function and helps you recover faster.

It speeds up recovery from soft tissue trauma. Research has also shown that it can reduce pain and increase movement in rheumatoid arthritis, sprains, and carpal tunnel syndrome, as well as the peripheral effects of diabetes.

other uses of contrast therapy

There’s plenty of strong evidence supporting its use to reduce delayed-onset muscle soreness, or DOMs, to speed up post-workout recovery, to reduce inflammation and swelling, and to reduce any stiffness or pain.

Contrast therapy can also be applied to the entire body, and the easiest way to do this is in the shower by finishing with only cold water. Now it takes some resolve, but the health benefits in terms of increased immune function and increased energy due to increased mitochondrial function make it worth considering leaning into the momentary shock that comes with a cold shower.

If you want to ease in with what’s aching, try contrast therapy on it for three days and see how your body responds before beginning anti-inflammatories.