Everything you need to know about Chamomile 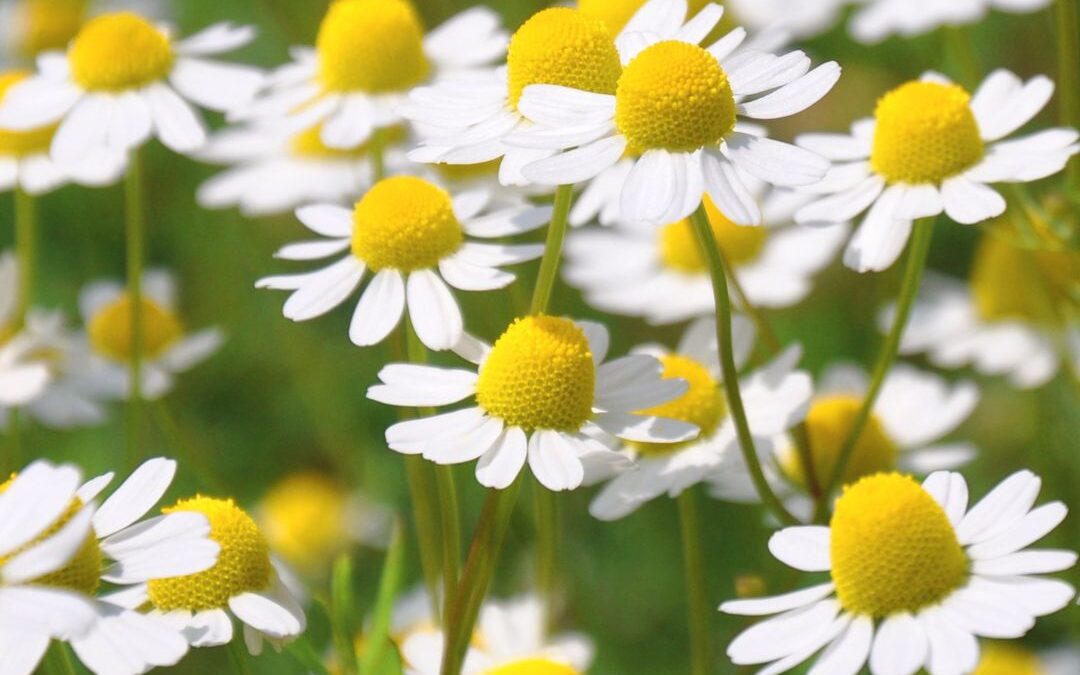 Chamomile is one of the most readily available yet often overlooked herbs.

Her ability to attend to almost everything and everyone makes her invaluable in your herbal homecare kit.

Chamomile is your herb of calm.

Chamomile can be used in any time of life from babies and children all the way through to the elderly. Inhale a cup of chamomile tea, the loose flowers rather than a tea bag, and what does it remind you of? For me, Sunny meadows, and sunkissed apples.

Chamomile was used as a medicine by the Greeks, the Romans and the Saxons, and their references through its name all refer to its Apple like scent.

Chamomile was a strewing herb, a witness to the weddings and the bridal bower; births, deaths and burials. The key theme running through its medicinal use by the Greeks, Romans and Saxons, was in its ability to break a fever.

It was also referred to in relation to managing pain and supporting women’s problems, particularly during labour. Modern research has confirmed its use as a smooth muscle relaxant and an anti inflammatory and also a tension releasing nervine; all useful qualities during labour.

There are two types of chamomile that are used medicinally, Roman and German Chamomile.

Their actions are similar, but Roman Chamomile is much more bitter than German Chamomile.

I discovered this in a very memorable way when I placed just two Roman chamomile fresh flower heads in a pot of hot water and drank it. Boy was it bitter!

Chamomile is a fabulous digestive herb that regulates peristalsis so it’s good for constipation and diarrhoea. Because it’s a nervine, it reduces anxiety so it can help regulate digestion through its action on the nervous system as well. Research has confirmed its effectiveness in IBS and stress related gut disorders.

It’s an anti inflammatory and a mild pain reliever as well. These actions also support our babies with colic. Breastfeeding mums can pass on the goodness of chamomile through their breast milk, or a bottle of diluted chamomile tea works a treat. Bathing baby in a bath infused with chamomile tea helps both the parent and the baby to settle.

How to use Chamomile

Bathing in chamomile is one of my favourite applications, especially if you’re treating sunburn, windburn or itchy insect bites. It can be as easy as four to six chamomile tea bags added to your bath. Check out the accompanying show notes for herbal bath bag recipe.

Chamomile is a wonderful skin herb. It calms, brightened, soothes and heals. It does this for any surface, inside and out. There’s a tonne of research supporting chamomile’s ability to calm anxiety and nervous tension. It’s a great tea when an overly busy mind or a stressful day is getting in the way of sleep. Particularly if it’s combined with some green Oatstraw and some skullcap. That’s the lateriflora not the Baical skullcap.

Chamomile is the gardeners’ friend

Chamomile has a special place in the gardener’s heart.

Known as the plants physician, plant chamomile near ailing plants or apply a chamomile tea.

Soaking your seeds and weak chamomile tea can prevent damping off. Now damping is where your germinating seeds are killed off by a particular fungus that’s found in the ground. Also, the tannins found in chamomile and many other herbs can increase germination by softening the seeds outer shell.

A really strong chamomile tea makes an effective insecticide. Steep one cup of chamomile flowers in three cups of water for 24 hours and then strain it into a spray bottle. Spray on your affected plants but please make sure you don’t spray on our beloved bees. This works best before or after the sun is high in the sky as it’s too much stress on your plants if you’re applying this during a hot spell or direct sunshine.

The best garden neighbours for chamomile are the Brassicas – cabbage, broccoli, cauliflower; also onions, beans and cucumbers. And if you want to up the pollinating ante, plant chamomile near your Solanaceae family. These are your tomatoes, peppers and aubergines.

There are so many ways to incorporate chamomile into your daily whether it’s getting our whiff as you brush by her in the garden or you’re closing a busy day by burning chamomile essential oil in the diffuser or soaking in a chamomile bath. Find a way to de-frazzle your nervous system with the aid of chamomile and bring a little more calm into your day.