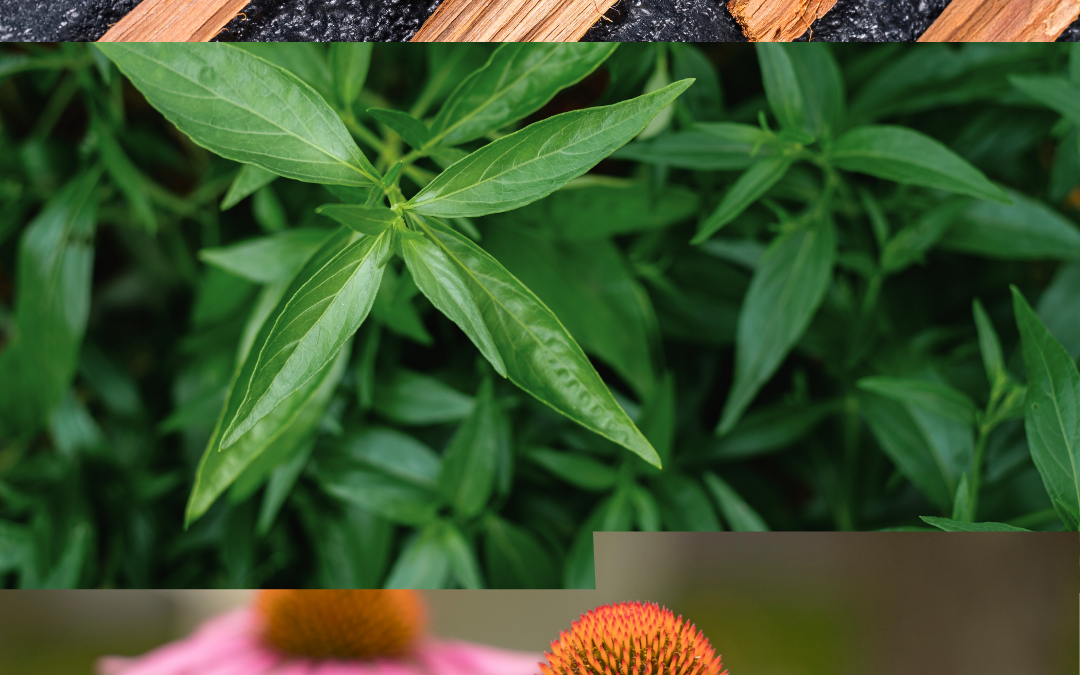 Many herbs can help to boost your immune system.

We have herbs that are specifically used for immune support, and herbs that boost immunity as a byproduct of doing other things.

Today, we are looking at three herbs for supporting the immune system: Cat’s claw, Andrographis and Echinacea.

Cat’s Claw, or Uncaria tomentosa, comes from Central and South America and is named because the thorns look like cat’s laws.

The bark is used in herbal medicine. It is most commonly known as an antioxidant and anti-inflammatory.

There is a lot of research that shows that the glycosides in Cat’s Claw can stop the activation of several inflammatory markers in your body. It is an important antioxidant because it teams up with free radicals and calms them down so that they no longer need to wonder in the body and wreak havoc.

Another interesting thing is that its alkaloids can stimulate the production of cytokines. Cytokines play a key role in the growth of other immune system cells, and in signaling to the immune system that it is time to get to work.

Its immune boosting activity is known to be the result of increasing our T helper or B family cells and upregulating the white blood cells, particularly the granulocytes. When there is an infection and inflammation, granulocytes race to the area, where they dump their granules.

Andrographis or Andrographis paniculata hails from India and Sri Lanka, and is often referred to in traditional texts as the king of the bitters. It is commonly used in Ayurvedic medicine and in Traditional Chinese medicine.

It is known for its anti-inflammatory, antiviral, and antioxidant properties. There are several clinical trials supporting its use in fighting upper respiratory tract infections. It has been found to reduce the duration of coughs and sore throats. It is an all-rounder when it comes to immunity.

Based on research, it has anti-microbial properties against Bacillus subtilis, E. coli, and Pseudomonas aeruginosa, and also acts as an antifungal against Candida albicans.

It reduces the release of inflammatory mediators like NO (Nitric oxide), Interleukin-1-Beta (IL-1b), Interleukin 6 (IL-6), Prostaglandin E2 (PGE2), Thromboxane B2 (TXB2), and it can reduce allergy symptoms by inhibiting Leukotriene B4 (LTB4), but it is not an antihistamine.

Animal studies have demonstrated its ability to stimulate the immune system and laboratory studies have shown that the phytochemical andrographolide increases human peripheral blood lymphocytes that has a broad action on the immune front.

It is anti-inflammatory, an antioxidant and a pain reliever. It is also becoming well known in the mainstream for its adaptogenic effects, although herbalists have been using it for quite some time as an adaptogen.

It is best known as an anti-microbial and anti-viral immune modulator. It can stimulate or suppress your immune system, and a diaphoretic to help you sweat. It also supports the lymphatic system.

It is the glycosides known as echinacosides that are responsible for the telltale tingle on your tongue. If there’s no tingle, there’s no echinocytes and you need it for immune function.

Choose a different echinacea product if you want immune support and you’re tingle free. Its ability to strengthen the immune system by activating the neutrophils and macrophages, the leukocytes, and the natural killer cells makes it a great preventative medicine for respiratory infections.

Echinacea is known worldwide as the immune herb and its reputation is certainly backed by research.

Natural doesn’t necessarily mean it is not harmful.

If you have existing medical conditions, are pregnant or lactating, or taking medications, speak to your medical herbalist because they are trained in herb-drug interactions. They have the depth of herbal knowledge to connect you with the herbs that will work best for your immunity.